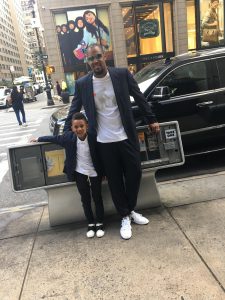 Pro basketball player, business owner, motivational speaker, proud father, devoted husband, and now emerging designer. Jamel Thomas feels privileged and humbled to have earned each of these titles. Each role relays a piece of Jamel’s story – one of tragedy, courage, perseverance and love.

As a child, Jamel grew up disadvantaged in a tough Brooklyn neighborhood without a father figure. His struggle began with the devastating murder of his twenty-three-year-old mother at the age of four. Though his aunt adopted him to keep him in the family, Jamel lacked direction and spent much his time on the streets and in trouble.

A natural athlete, basketball was built into Jamel’s DNA, evidenced by his half-brother Sebastian Telfair and cousin Stephon Marbury who went on to play in the NBA. But Jamel’s own journey from the streets of Coney Island to the NBA was no easy ride; it was paved with drive and dedication. At Abraham Lincoln High School, Jamel met his English teacher Mrs. Braverman who, along with her husband, saw his untapped potential and became his adoptive parents. Jamel credits the Bravermans with helping mold him into the man he is today. Fueled by their support and unconditional love, Jamel went on to win the state championship with his high school team and earn a basketball scholarship to Providence College in Rhode Island. 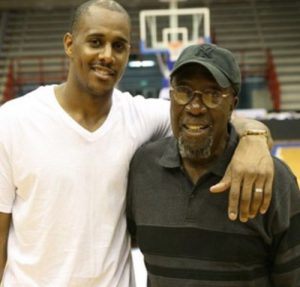 As captain of his basketball team, Jamel became Providence’s star player, leading the team to the prestigious Elite Eight — the NCAA Men’s Division finals. Despite not being drafted immediately out of college by the NBA, Jamel has never taken “No” for an answer and “put the work in until it worked out”. This motto has motivated Jamel to pursue his goals on and off the court. His tenacity paid off and he was ultimately drafted to play for the Boston Celtics, Golden State Warriors, and New Jersey Nets. Thomas later moved overseas to play professionally in Turkey, Italy and Greece.

After returning from abroad in 2010, Jamel married his best friend and partner, Onika Thomas. Together, they welcomed their son Jamel Thomas Jr. who has become the center of their world. A dedicated husband and father, Jamel strives to be a man his family looks up to. Today, he runs Movement through Hoops – a basketball training program in Manhattan – and is a sought after motivational speaker.

On his inspirational journey from his painful youth to his prosperous career, Jamel learned to see the beauty in the struggle. He is proof that regardless of your circumstances, with confidence and determination you can rise above. An original designer with a powerful story to tell, Jamel has woven his motivational messages into an eponymous clothing line of urban athletic wear.